Systemic sclerosis and the scleroderma pattern

The involvement of skin microcirculation in systemic sclerosis and Raynaud phenomenon

Systemic sclerosis is a rare and progressive connective tissue disease of multifactorial origin that is characterized by vascular abnormalities and diffuse fibrosis in the skin and joints, and by progressive involvement of the internal organs. Systemic sclerosis is about eight times more common among women than men. It is most common in the third to fifth decades of life and is rare in children.


The diagnosis of early systemic sclerosis is partially clinical and laboratory tests, including assays of scleroderma-specific serum autoantibodies, can help to confirm the diagnosis.


Clinical symptoms of overt disease include peripheral and persistent microvascular vasocontriction, swelling of the fingers, skin tightening and contractures of the fingers, polyarthralgia and possibly dysphagia.

The most common initial symptoms and signs are vascular, such as Raynaud phenomenon, which is often long-lasting, as well as insidious swelling of the distal extremities (that is, puffy fingers), followed by gradual thickening of the skin of the face and fingers with late skin ulcers.

Most SSc-related deaths are attributable to heart, kidney and lung involvement. In the heart, diffuse myo-cardial fibrosis and cardiac conduction abnormalities can occur.

In the kidneys, renal ischemia and hypertension can result from the development of intimal hyperplasia of interlobular and arcuate arteries. Lung involvement can arise from interstitial and peribronchial fibrosis or intimal hyperplasia of the small pulmonary arteries, which, in the long term, can lead to the development pulmonary arterial hypertension.


The pathophysiology of systemic sclerosis involves endothelial and vascular damage and the activation of fibroblasts; consequently, collagen and other extracellular matrix proteins are overproduced in almost all tissues.

The innate and adaptive immune systems are activated in the peri-vascular areas, release their component immunological mediators such as cytokines and growth factors and extensive fibrosis in the dermal and subcutaneous layers develops.


Peripheral microvascular damage in systemic sclerosis is characterized by dynamic alterations to the capillaries that lead to a progressive decrease in their density. In the nailfolds, where it is possible to easily detect the morphological changes, capillary loops dilate owing to damage from the inflammatory reaction and gradually lose their content of red blood cells, and microvascular loops are lost as a consequence of their progressive destruction.


Specific treatment of systemic sclerosis is difficult, and as a result the emphasis is often on the management of symptoms and complications. as yet, no treatment is available that completely halts the natural progression of ‘clinically recognizable’ disease. Consequently, efforts are being made to study the disease in its early stages, before overt disease and irreversible organ damage have occurred. 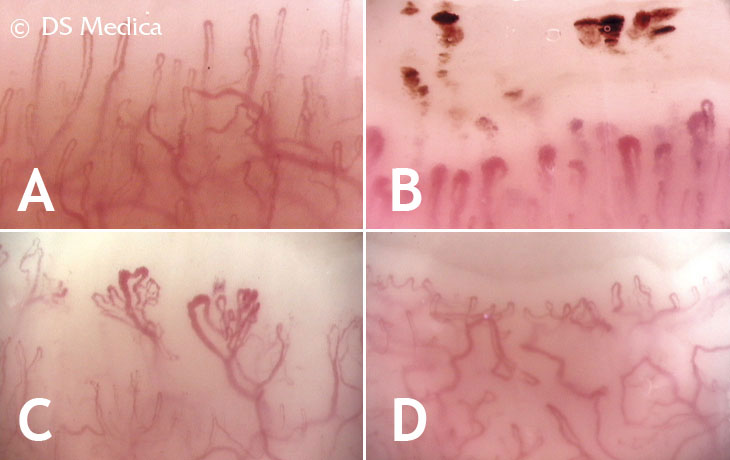 Systemic sclerosis
A - Capillaroscopic pattern observed in the healty subject.


In general terms, Raynaud phenomenon is an episodic vasospasm of the peripheral blood vessels that results from dysregulation of cutaneous vasoconstriction and vasodilatation.

In the general population, Raynaud phenomenon presents as episodic altered microcirculation in the digits leading to ‘cold hands’, usually in response to exposure to cold or stress, although the thumb is not usually involved.

At the start of an attack the digits turn white when blood flow to the area ceases (ischemia), then to blue as deoxygenated blood returns, and then to red upon reperfusion.

The late stages of an attack are associated with pain and sometimes paresthesia, and, rarely, ulcera tion of the fingers and toes are observed.


Raynaud phenomenon can be primary (idiopathic), that is, not associated with an underlying disease, or secondary to several different conditions and causes, especially connective tissue diseases such as systemic sclerosis.


Primary Raynaud phenomenon occurs more often in females (male to female ratio 1:4) and usually develops before age 20. The onset of primary Raynaud phenomenon in later years should always raise the suspicion of an underlying cause. An under lying disorder, most often systemic sclerosis or a scleroderma- spectrum disease, will be detected in almost 15% of cases after 1.5–3 years.

In normal conditions or in primary Raynaud phenomenon, the nailfold capillaroscopic pattern shows regular disposition of capillary loops along the nail-fold bed and no abnormal enlargements or capillary loss.

In patients with Raynaud phenomenon, however, one or more abnormal capillaroscopic findings should alert the physician to the possibility of secondary Raynaud phenomenon, owing to the presence of a previously undetected connective autoimmune disease.


Morphological markers of microvascular damage include giant capillaries, micro-hemorrhages, loss of capillaries, the presence of avascular areas and angiogenesis; these features characterize more than 95% of patients with overt SSc even if they are not observed concomitantly.

These sequential and dynamic capillaroscopic changes are typical of the microvascular involvement in SSc, and can be described by the term ‘SSc pattern’. 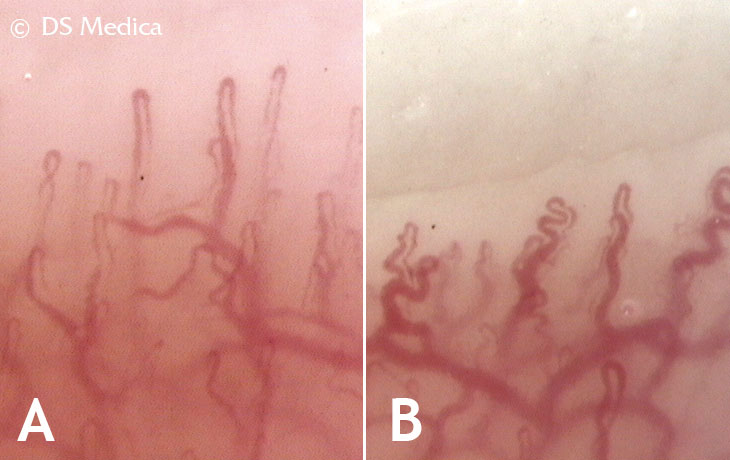 Raynaud phenomenon
A - Capillaroscopic pattern observed in the healty subject.

B - Capillaroscopic pattern observed in patient with secondary Raynaud phenomenon. Alterations of the microvascular architecture are evident.


The microvascular damage in systemic sclerosis is mainly characterized by increasing structural alterations of the capillaries with progressive decrease in their density. Blood flow is also altered, with an average slowing of flow and increased periods of stasis. Early in the disease, the peripheral microangiopathy may be well recognized and studied by nailfold capillaroscopy or better with the videocapillaroscopy, a non-invasive and safe technique, which is well reported to have both diagnostic and prognostic values in the presence of RP.


Microvascular alterations as detected by NVC in patients with systemic sclerosis have been re-classified in three different patterns.

Early stage is also characterized by microvessels with normal diameter coexisting with few enlarged capillaries that must be carefully investigated on all the fingers by considering the limited number of these nailfold changes during early phases of the disease.


Conversely, these changes are strongly increased in systemic sclerosis patients with an ‘active’ pattern.

Loss of capillaries, together with vascular architectural disorganization and ramified capillaries, were found to be rare in the early stages of systemic sclerosis, whereas they seem to increase with the progression of the fibrotic phase of the disease (‘active’ and ‘late’ patterns).


A significant and gradual increase of these latter vascular abnormalities is observed during the systemic sclerosis progression, and the three NVC patterns have been found to correlate with both RP and systemic sclerosis durations, reflecting at least the possible evolution of the disease process.

While in healthy control subjects and in patients with primary RP the morphological features of the nailfold microvascular bed may remain unchanged for a long time, patients with RP associated with SSc-spectrum disorders may, on the contrary, show a higher degree of morphological variability, even after a few days.